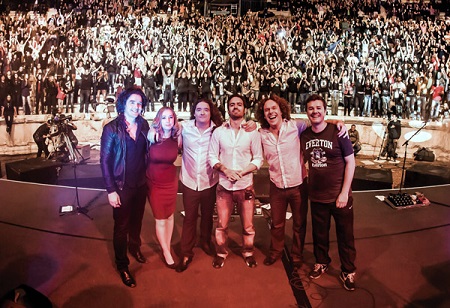 Dead Rhetoric: With Weather Systems doing so well here in the States, is it in the cards to make more returns to North America?

Cavanagh: Yeah, but I can’t write music to gain reaction from an audience. I can’t deliberately follow an album like Weather Systems to be more popular. The music has to be honest – I have to almost shut out the outside world to make the next album. But I am pleased and a little surprised that it has done well in America and everywhere else. I know the title helps – the concept is easy; the idea that the weather is a parallel with emotional systems, so on that level, people can get it. Although the message and lyrics are pretty simple, it’s also profound. It’s universal that people can identify with.

Dead Rhetoric: So are you thinking the next album already?

Dead Rhetoric: Without giving too much away, how are the songs sounding?

Cavanagh: It’s more of a variation. Obviously, with the addition of Daniel [Cardoso, multi-instrumentalist] we have the option of having more intricate drum parts. The songs will have simpler productions; mature elements that sound bigger. I would imagine that there will be quite a few piano songs. Not ballads just because they’re leaning on a piano, so just because they’re not ballads, they can be quite intense. We’re also bringing up a little bit the electronic element as well.

Dead Rhetoric: Switching gears, you had this period from ’05 to ’09 where you were inactive on the recording front and were getting things sorted out. How helpful was that now in terms of getting the band on track for today?

Cavanagh: One thing that helped from not making a record for so long is that when we did We Are Here…, we were able to choose the best songs and disregard songs that even two years before, we thought were good enough. So in that respect, the album was universally praised because there were no bad songs on it.

Dead Rhetoric: “Thin Air” was a great introductory song to come back.

Cavanagh: Yeah, and that song didn’t have its lyrics finished until the very last day in the studio. It’s helpful to look at things in a positive light, even though we were away from quite some time and mistakes were made along the way. But, when the bottom line hit, the fact is we came back with a very strong record and were able to get even stronger with Weather Systems, so I suppose things happen for a reason.

Dead Rhetoric: I’ve always wondered this: You haven’t been metal since the mid-90’s, yet you still garner a lot of support from the metal scene. What are your thoughts on that? Are you okay with it?

Cavanagh: I’ll take support from anybody. I’m not fussy. If it’s a metalhead, or techno, or classical, or electronic fans, all I ask is that they open their minds to what we’re doing now and I don’t have much for fans who want us to go back to how we were in the past. That’s not what we’re about. Apart from that, I’m happy with anybody’s support; I’m grateful for it.

Dead Rhetoric: I know you wrestled with changing the name of the band for quite some time as you were making this transition. How close did you come to a name change?

Cavanagh: We did come close, but we were advised strongly not to.

Cavanagh: Yeah, we were advised by people in the industry not to do it. We did come close, but it was only after the album was made and released that we heard the name we would have gone for, and if it had been two years earlier, we might not be having this conversation now.

Dead Rhetoric: Are you able to reveal the name?

Cavanagh: It would have been “Universal.” If I had heard that name two years earlier, I may have had the courage. Right after the album was released somebody had mentioned that it would have been a good idea to make the change.

Dead Rhetoric: I guess that’s another part in your unique history, eh?

Cavanagh: The music has changed so much. We’ve had been looking for so long for labels that actually trust the band. A lot of labels want Anathema to rediscover their roots and history, but we are who are we are. It will pay off anyway…it’s too late for me to decide one way or the other. [laughs]