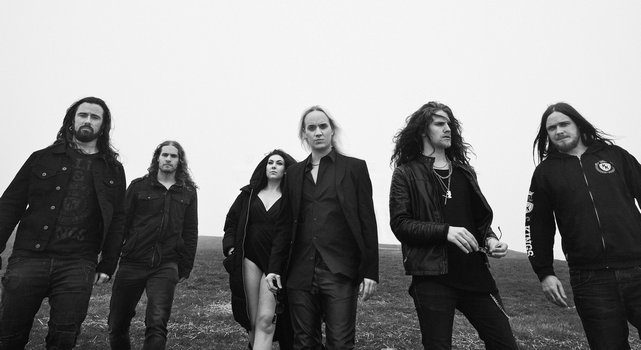 Dead Rhetoric: I think it’s kind of cool to see those sort of interactions, as a fan, between bands. As you said, it’s not just with women.

Ryd: We are good friends – I don’t know of anybody that I dislike. We support each other. It’s great, like I said before, you have things in common. For instance, if you meet other journalists, you probably get along well. We happen to be an industry where there’s a few people doing a lot. There’s not a lot of journalists, not a lot of people who became photographers, and not a lot who decided to be musicians. We end up working very close together and I think it’s very nice. It brings joy to my life that we all do it together. We are unified. I think that inspires the fans as well, to watch our weird professions come together. It’s like being free and expressing ourselves. If we can fulfill other people’s lives by what we do, that is the best reward you can get.

Dead Rhetoric: As you were saying, Amaranthe has been around for about 10 years. At this point, it seems Amaranthe has been a big influence to a new crop of modern metal bands, do you agree? I know I’ve heard some newer bands that have a bit of your sound to them.

Ryd: Yeah, I know what you mean. I’ve seen a few bands as well actually. From my perspective, people are not questioning our concept as much anymore, as they used to. That’s proof that it has made its stamp in the scene. Some younger bands have been inspired, and they do not judge you in the same way. I think that’s also the same thing with other professions. The older generation rules the world, and then the younger generation comes in with their crazy idea, like Facebook and Google, and now they are taking over the world.

We have a different perspective, and I can see that the younger audience doesn’t judge us because they don’t have anything to compare it with. They weren’t living in the late ‘60s/‘70s when metal was being created. Those people might think, “What the fuck are we [Amaranthe] doing? We are ruining the metal scene.” I see that there are so many more people from the younger generation enjoying metal, and if they enjoy Amaranthe, they also enjoy Dark Tranquillity, Within Temptation, Ghost, and Arch Enemy because they have explored the genre. It’s very nice to see that we don’t have to defend ourselves. We can feel proud that we have opened up the gates for those from the newer generation.

Dead Rhetoric: We’ve talked about the stresses in the band and the problems and demands of being a touring musician. So what keeps you positive in life?

Ryd: I was thinking about this the other day. I know what it’s like to be happy. I remember times in my life when everything fell into place and I was in complete joy. From my perspective, it was taken away from me. When I was born, I was the happiest person as a kid, then life happened [laughs]. Then a lot of bad things happened. I was extremely sad at times. So the goal in my life is to reach for that feeling that I enjoyed the most, which was to be happy.

My goal is to never get brought down by anything negative, because I hate negativity. I think it’s unnecessary and the most evil thing for me. I do not want that to win. I am fighting a war against evil and I want the positive to win. That’s why I always stay positive, because that is the thing I enjoy the most. Like you said, it’s strange because I’ve been through many negative and awful things. At one point in my life, I was happy so I know what it feels like, and that is what I want to achieve every day in my life. I want to reach happiness and 100% euphoria. That is what drives me.

Dead Rhetoric: What touring plans do you have in the near future? I know you have two runs coming with Powerwolf in Europe.

Ryd: That is the plan. We are going to cover Europe. The first run has a lot of cities in Germany where we haven’t visited, and we are going to focus on Europe with the next tour. Then the most important thing of all is that we are really trying to get a tour happening in the US. We think it has been too long and we miss you guys. I cannot wait to tour in America. The plan is to make a plan to tour in the US, and also get a few dates in Japan. Hopefully, we will go from Japan to Australia for the first time. Russia is also on the plan. Angela [Gossow], our new manager, is working on a lot of plans for us.

Maximized – A Trinity of Amaranthe Shows