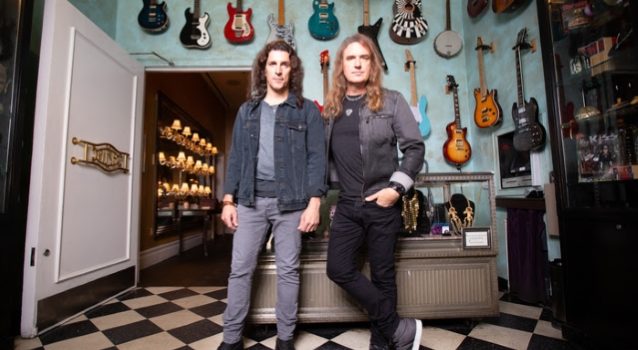 A band featuring the respective bassists from Anthrax and Megadeth does not a good one make, but you have to hand it to Frank Bello and David Ellefson: Their Altitudes & Attitude side project makes a sufficient argument for the pair’s songwriting acumen. Originally hatched while Anthrax and Megadeth were making the rounds on the “Big Four” tour, Altitudes & Attitude released their self-titled debut EP four years ago to largely positive results, even though it totally and purposely bypasses the thrash sound that built the men’s career. Five years later, Altitudes & Attitude return with Get it Out, an album loaded with arena-sized hard rock hooks that do battle with Foo Fighters, Cheap Trick and The Clash, for good measure. Bello’s on vocals here and frankly (no pun intended), he’s probably capable of singing for a half-dozen top-tier metal bands; his clean, but throaty delivery augmenting lead singles “Late” and “Out Here” with the type of choruses that engage and hang around. Coupled with some high-flying guest appearances by way of Ace Frehley (Kiss), Nita Strauss (Alice Cooper) and Satchel (Steel Panther) and what you have is simply a celebration of good, ample songwriting. Nothing more to it than that, as Ellefson was kind enough to explain this email interview:

Dead Rhetoric: You both play in bands with established songwriting cores. Can you share the type of creative flexibility A&A affords?

David Ellefson: We each bring in our own songs and we also get to collaborate on each other’s ideas, too. It’s really an ideal setting because on one hand we get to be our own artists, but also supporting cast members to each other’s songs, too. Plus, we get to create on instruments other than just bass (vocals, guitar, 8-string bass) which really allows for some cool creative exploration between us. Nothing is off limits in this band.

Dead Rhetoric: Both of your main bands have been busy in the last few years. Did you think it would originally take five years to release the follow-up to your debut EP?

Ellefson: We were hoping it wouldn’t take this long to get the LP out, and actually were thinking we might have it out in 2018. But, when Frank got busy on the Slayer farewell tour last summer, we moved things around to find this window right now in early 2019. Actually, the timing couldn’t be better, so in hindsight, it all worked out perfectly.

Dead Rhetoric: With so many albums between the two of you, what have you learned about songwriting?

Ellefson: I think we’ve learned that in each musical setting, you have a role, usually one that is carved out from the very beginning. So, with A&A, Frank and I got to create the roles of us as the primary writers and creators of the songs, the sound, the look and the essence of what this band is. It’s nice to have a chance to try this again with all of our years of experience because when you’re young you freak out over so much small and meaningless stuff because it all seems so big and monumental at that time. But now at this point in our lives and careers, we’ve sorta figured out to not sweat the small stuff….and in the end, it’s all just small stuff.

Dead Rhetoric: Along those lines, do you think it’s sort of a lost art?

Ellefson: Songwriting is a craft and the more you work at it the better you get at it. Some people just have a natural method, wit and charm to their delivery, which I always admire. Frank has that in a lot of ways on his songs; they are neat, compact and well-written in their form and delivery. My songs tend to get more complex, which quires deeper attention to the overall process of writing and arranging them. I guess I tend to second guess myself a bit more, too, whereas Frank has a simplicity and levity that is ironically offset in the depth of his subject matter. When he as a song ready to record, he really feels it.

Dead Rhetoric: Describe the creative process between the two of you. Is it as open and free-flowing as it seems?

Ellefson: Yes, it is. I think what you hear on the LP is what the process really is when we are in the room writing and recording it; Fun, open and friendly. While the LP consisted of about six recording sessions to lay down all the tracks over about a four-year period, Frank usually brought in two of his songs, while I would bring in one full song and another one about 50-75 percent complete that Frank and I could collaborate on together. I love being able to bring an idea to Frank that’s kind of open to development, and let the storyline and interpretation of it develop between us. Collaboration isn’t always like that in many bands but we have so many similar aspects to our lives and careers that the collaboration between us is really easy and natural. I’m very comfortable working with Frank and if we get stuck on an idea, we just let it go and move on. Sometimes certain ideas aren’t ready for recording at that moment so we don’t stress over it. We just move on to the next one.

Dead Rhetoric: Get it Out is loaded with hooks and memorable melodies. What were the main criteria when composing? To ensure the songs had hooks and great melodies?

Ellefson: There really wasn’t any criteria other than when we liked a song or idea, we both got excited and new it was time to record it. Once we did the first three songs for the EP back in 2013, I think we set the bar on what we felt was an A&A song. Some of it could be mellow and melodic, while other times it could be harder and driving. I think the only hard-line criteria was that we just understood this was not going to be a thrash record, and that never even had to be verbalized between us; we just understood it all along.

Dead Rhetoric: Frank’s vocals are fantastic. How much fun was it to write such a vocal-driven album?

Ellefson: He really is a fantastic singer! Not only does he have a cool vibe and tone to his voice, but he really has a natural character that is simple and believable. And honestly, that is more important to me than any fancy vocal wizard. I’ve learned over the years that the best singers make the listener comfortable to really believe what he’s saying and to really connect the story with the listener. I think that is way more than how fancy his chops are. As for writing around Frank’s vocals, as much as I bring in a lot of riffs, it was refreshing to just outline these arrangements with simple chord changes instead of having to always rely on the song being rooted in a riff like we do in thrash metal. I love riffs, but chord changes on this album really gave us the liberty to let the vocal melodies pretty much go anywhere, as well as it let me play an entirely different style of bass inside the songs.

Dead Rhetoric: Any guest appearances stick out for you in particular? Both Ace and Nita’s solos really lend a lot to their respective songs.

Ellefson: Honestly, everybody’s solos were incredible! It’s like they were tailor-made for each song they played on, which just goes to show how great they all are. And, of course, Ace, he’s our childhood hero, so to have him play on our debut LP is nothing short of a bucket list moment for us. We are forever thankful to all of them.

Dead Rhetoric: What do you hope to get out of your upcoming live dates?

Ellefson: So far, it’s been a really fun live show for us on the gigs we’ve played in the USA, and now to take this to Europe is really exciting. Frank and I have a very easy way about us onstage, like two good buddies jamming some songs for our fans and friends. I think it makes the evening really unique and special for everyone.

Dead Rhetoric: Finally, what’s on deck for the two of you as 2019 gets rolling along?

Ellefson: We are each working on our Megadeth and Anthrax albums, respectively. Aside from that, we have more A&A shows in the cue now and we couldn’t be happier!