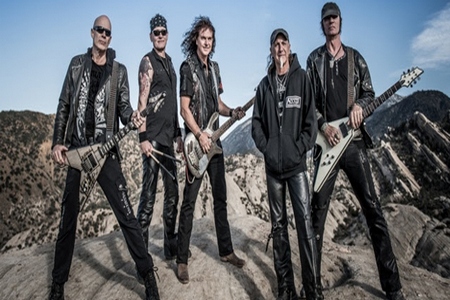 Dead Rhetoric: Next from Restless and Wild is “Shake Your Heads”…

Hoffmann: Yes, I just mentioned that song. “Shake Your Heads” is heavily influenced by Judas Priest. I remember we were coming off the Judas Priest tour and we loved those heavy riffs and groove they had. We wanted to write a song just like that, and that’s what you hear.

Dead Rhetoric: Onto Balls to the Wall and one of the songs I was very happy to hear in the live sets, “Losers and Winners”…

Hoffmann: That is a song we have sort of discovered since we got together with Mark. Back in the day we never used to play that, and we found out how much fun it is to play, and people love it. By request someone was asking us to play it again, we tried it and once we did we found it was pretty cool. It’s still in the live set today. It’s a cool riff to play, a lot of fun.

Hoffmann: “Bound to Fail” is a somewhat odd song in my mind. The most memorable part is the guitar solo at the end, which goes on for a minute and half to two minutes. We still play that as an outro to our live show because it has such a euphoric and anthemic vibe to it, almost like a national anthem. That is really my favorite part of the song. There are two separate parts to the song, and it’s almost a cut in half type of song.

Dead Rhetoric: I must say I was very pleased with the co-headlining run you did on the Stalingrad tour with Kreator across North America; a very killer set list where you just kept the pedal on the metal with 15 songs and 75 minutes, no fake encores or extended solos, etc… Did you enjoy that tour, the turnouts, and are you contemplating another possible co-headline situation for North America with another act sometime in 2015?

Hoffmann: Yes, we definitely are. These 4 shows that we are going to do at the beginning of this next tour run; the ones in the US we are going to have Metal Church and Raven that are totally in the same genre, and that may be the better way to go. Kreator is a great German metal band, but that was the only thing we had in common. You never really know which way to go, to play with a band that’s in the same vein or go with somebody slightly outside of that. It’s open for debate, we will see.

Dead Rhetoric: Are there new territories that you’ve been able to play out since reuniting that you weren’t able to get to during your 1980’s heydays? Or are there particular countries you’d love to get to that haven’t happened as of yet?

Hoffmann: All of Eastern Europe is now strong, compared to the 1980’s when it was forbidden territory to play there. We went into Poland and Russia, now it’s all open and those are awesome countries to tour, plus the Ukraine, Bulgaria, so that’s a huge new market for us. Also South America is stronger and stronger. This year for the first time we are going to Australia, which personally I love it. We never made it down there before. Personally I still would love to go to China one day, and even India, we will see. But it all needs to make sense and the logistics have to be there, we don’t just want to go over there to say we have been there, and things aren’t up to snuff. We want to deliver good shows and promote the band there in a good way. We want to give the fans something that is worthwhile rather than just go in there as if to say we have been there, you know what I mean?

Dead Rhetoric: Given the change of singers and 3 year break between Russian Roulette to Eat the Heat, in retrospect would you have done anything differently to keep Accept’s momentum going stronger in the late 80’s, or did you sense a changing of tides in metal even then?

Hoffmann: That is always hard to answer. Of course the luxury of hindsight, you never really know what would have happened if you had done this, that, and the other thing. I usually don’t concern myself with that too much because at the time it seemed like it was the right decision to make and it was based on facts. To me it’s almost a moot point to discuss what happened.

Dead Rhetoric: Who were some of the bands that you looked to as models of success? Would names like The Scorpions, Black Sabbath, and Judas Priest come to mind as Accept built their following through the late 70’s and 1980’s?

Hoffmann: Judas Priest for sure. The Scorpions to a certain degree musically, but they were more on the rock side of things where we were more influenced by Judas Priest and AC/DC. As far as a German band having successful careers, oh my God, The Scorpions are my heroes. I admire their success. Musically, AC/DC, Judas Priest; and I tell you what, we played one time early in our career with a band from Holland called Golden Earring, they have been an amazing influence. We played with a band that was not just a metal band, and delicate musicians who played together as a band. A lot of guys can be so damned loud, and not care about nuances, for them it’s 100% all the time. A little bit can get lost in that, where Golden Earring had that touch to really listen to each other and react to each other, they are incredible live players. We opened 3 shows for them in 1984 up in Canada, and we were like ‘wow!’, that made a big impression on us.

Dead Rhetoric: Do you have a particular thought on balancing out guitar technique versus feeling when it comes to your playing style?

Hoffmann: For me expression of feeling is everything. I wouldn’t say I concentrate much on technique and speed, I never wanted to be the fastest or flashiest player, it’s all about playing that one note and playing it right, it’s worth more than 20 notes. Ideally you have the expression and the virtuosity, but if I have the choice I always go for the expression. That’s what it’s all about. When I record I want to know what I want to play. There are a million different ways of how to play that same exact melody, if you really sit down and try different finger settings and different bendings, you can play it a million ways. You can change the impact of a little phrase just by playing it differently. I will do an incredible amount of takes just to concentrate on a delivery.

Dead Rhetoric: So have there been times where you’ve been able to capture something spontaneously because of all these takes?

Hoffmann: Sure, a lot of times I use first takes but a lot of times its take number 758 because I can do it better. It all depends, sometimes a lot of time demo solos can be hard to re-capture. “Fall of the Empire” is a demo solo that I left on the final album, because I couldn’t figure out a way of doing that again the way I wanted to. That shows that it has something magical, you play it for the first time and there’s something about that that you could lose the more often that you do it.

Dead Rhetoric: Playing Wacken, are you surprised by how things have evolved in terms of all the different sub-genres of metal, going aggressive in some areas, symphonic and folk in others?

Hoffmann: I guess it’s just a sign of the times, everybody wants something unique and something they can relate to, a little niche for themselves. They combine a lot of things that haven’t been combined, anything that hasn’t been done before has its own sub-genres. It’s a sign of how metal is still popular now, maybe more so than ever.

Dead Rhetoric: I know in the fall you’ll be performing four select shows in California, Nevada, and New York before gearing up for a long fall headlining run of shows across Europe; what can the fans expect for the early part of 2015? Will the documentary/live concert DVD you talked about in our last interview hopefully be in the cards for next year (as I know the digipack version of the new album includes your Santiago, Chile show from the Stalingrad tour)?

Hoffmann: So that’s a pretty cool bonus for the fans, there were discussions that we may release as its own DVD, but we decided to have it for the digipack version of the album. Tremendous value for the fans. We will keep filming and documenting material, and when we have enough we will address this project. Obviously it’s in the cards to do a full blown North American tour in 2015, that’s why we did these 4 special shows this year. South America, and probably more of Europe, probably some more festivals in the summer, we will see.