Little did I know when I submitted part one of this endeavor in late August that it would be months before I was able to revisit it and continue the journey. Such, I suppose, is what happens when you venture into the realm of graduate studies. It was a hell of a semester and, between the several dozen books for class and maintaining reviews, a pet project like this one sort of fell by the wayside.

That’s probably okay for as the albums in question sat untouched for years waiting for curious listeners, so too would they keep a couple months on a desk in my room. With that said, as I’m now firmly in the throws of the lull between semesters I look to finish the remaining three parts of this journey before I am given back to the study world.

Two month later update – timing did not work in favor of finishing the remaining parts before the semester began and indeed, this second part is currently under the throws of being finished due to a recent week spent driving. What an expansive journey this experience has become – it is remarkable how difficult it is to readily make time to listen to CDs with intention.

Peordh – Glaring From Spacious Woods And Mountains Of Eternal Frost (2007)
This was the album that grabbed my attention enough to throw caution to the wind and embrace the unknown weird of the peripheral mid-to-late aughts black metal underground. While the album title is now outside the ordinary black metal milieu, all I could think at the time was that cover is awful. It is not uncommon to see woodsy vistas with or without human subjects but it is uncommon for yours truly to see one fairly local to where I traffic around regularly. The axe, likely more than anything in the shot, sold it as something that had to be experienced – is this truly serious? Yes. Yes it is.

For maximum setting appropriateness I listened to this album while transiting across a signal void of West Virginia during a recent holiday commute. US 48 is a stellar drive and I figured there would be no better time to put to the test the 7 track, 74 minute experience that is Glaring From Spacious Woods And Mountains Of Eternal Frost. An east coast contemporary to the budding Cascadian scene this album is certainly not.

In terms of aural expectation, I cannot say I had any going in beyond some basic assumptions (this is black metal, it has a nature bent, it features extensive synths) and it matches those assumptions in varying degrees. The vocals, most curiously, are delivered almost exclusively in a kind of distorted whisper. Real guitar and bass playing is matched with a drum machine (probably) and extensive synth and synthetic instruments (like flutes). The songs ebb and flow and are often quite long and unfortunately are never quite engaging enough to justify their sizes. This is especially true with the minimalistic synth piece “An Image Of Truth”, which follows a repetition of a couple of parts for the entirety of its 17 minutes. Drone can be very engaging, this song is not.

I can appreciate the sizable amount of work that goes into something like Glaring From Spacious Woods And Mounts Of Eternal Frost, even if I do not particularly enjoy it 12 years later. It’s a novel release and, in reading through the album booklet, there appears to be an elaborate mythology the band’s creator has built through his work. It also didn’t make for a bad time driving through a suitable environment.

Was it worth the purchase? For the historical context and the absurdity of it – yes. 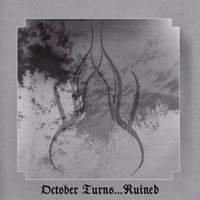 Uvall – October Turns… Ruined (2006)
Another fogged out walk down the mid-aughts world of homebrew black metal. In part this album seems indicative of where USBM was in this time frame, not to embrace the ‘basement’ trope but certainly the homespun and limited in both its scope and reach. You will find no blastbeats or extensive tremolo indulgences here (indeed, the drums are produced such at times they’re barely audible at all).

Atmosphere then is the name of the game as these tracks flow at a medium to slow pace, including the monstrously-sized (15 minute) closer “End”. No depressive-styled phantom shrieks or wails, the vocal delivery is a harsh, background troll. There isn’t much to see here nor is there much to discuss, October Turns…Ruined, peculiar title and all, is a fairly monotonous experience which was likely intentional.

Monotonous and gray as it may be, it did make for a fitting accompaniment to driving across an overcast and non-descript eastern Connecticut. Unless the individual listener is an intrepid historian of the time period, however, the enjoyment level and ultimate utility of this album for most is going to be fairly limited. This is an album best left in the contextual era which it was made.

Worth it? Mostly. Notable primarily because the band’s homepage is hosted on Angelfire (what remains of it, at any rate). If that doesn’t make sense to you, stay far away from this release. 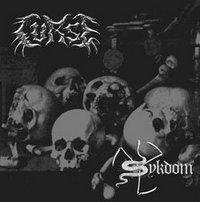 Curse/Sykdom – In Life & In Death/Verden og Fanden (split) (2007)
A repeat and someone new – a luminary of the Icelandic black metal scene long before the Deathspell Omega-influenced golden age the country is currently experiencing. Sykdom, which was featured in part I, occupies 6 tracks (including an intro and outro) of this ten track split while Curse (named first but featured second) occupies the latter four. Odd is all there is here.

The Sykdom half does not stray far in its offerings from the material covered in Under Krigen. Mid-paced and melodically inclined remained the band’s game – kitschy organ bookends Sykdom’s contributions to the split, the initial flowing straight into the band’s strongest offering, “Doedsens stillhet”. There is a feeling of development here though coming from the full length that preceded this split and is likely indicative of where the band might have gone had it not faded into oblivion after this release.

Curse will feature again as their full length Slaughter of the Stars is an album released in this time period and picked up as part of the same sale. So what of their half of this split? Sequencing is anonymous, simply consisting of parts “II-V”, part I being a track on the band’s prior full length. What remains is a quick-paced, rolling blackened exercise. It makes sense if the four parts were conceived as pieces of a cohesive whole as, realistically, there is little separating the parts or making them particularly identifiable when taken separately. More flavors are added to the experience as it bulls along though and of the two halves of the split, I do find this one more engaging.

Worth it? For the historian, sure. Also to see how much black metal has benefited from the internet since 2010.

A Saga of Online Sales: A Twelve Album Journey (Part I)