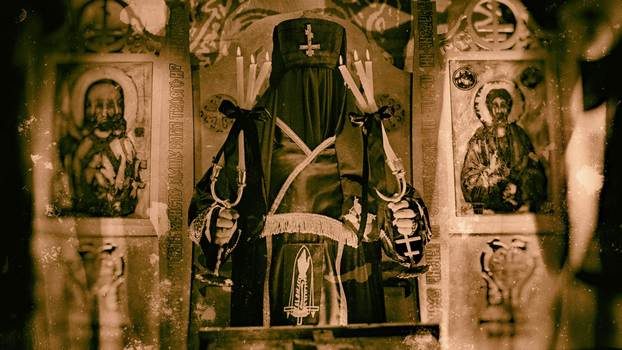 For as long as people have worked together to create (art or otherwise) they’ve similarly subsequently found ways to wind up fighting over the creation. I won’t retread the basis of the story as it’s explained in great detail in almost every review of either of these albums and as with almost anything born in the internet era, even with direct primary source materials to go on (the creators), parsing the reality from embellishment is a tall order.

A tall order that doesn’t really matter when you hit play on either release. In terms of pure sonic lineage it’s clear almost immediately that the Drabikowski solo-vehicle Батюшка (even though as of the time of this writing I don’t think is using that name) Панихида shares far more in common with 2015’s celebrated Litourgiya. The guitar tone, the songwriting, and the choir use: all resonate with the same spiritual flavor of Litourgiya.

Now with that out of the way, what of the Krysiuk-lead Batushka (who, at least of now, can legally use the original name) and Hospodi? It’s both awesome and inconsistent (to me, anyway, my compatriot is quite taken with it and I can appreciate that). It’s a big, lush, enormous sounding record. In other ways it’s like a half finished cathedral where construction began in reverse: really ornate in the top and hollow below.

Commonalities are exactly what you’d expect: male Orthodox choral vocals are a centerpiece for both bands and in general are used in contrast with traditional black metal vocals. Drabikowski’s harsh vocals in this regard aren’t as readily identifiable as Krysiuk’s but it doesn’t distract from the experience. Панихида, in general, is a more uniform listen and every indication is that this is entirely by design with each of the songs being titled “Песнь”. Hospodi, on the other hand, approaches from a wider variety of angles: “Polunosznica”, its peculiar drunk-dudes-singing introduction notwithstanding, is a fairly traditional, scorching black metal exercise. Follow-up “Utrenia” is a foremost showcase in how fantastic this album sounds: thickness is married with moments of airiness as an internal pendulum swings between extremes.

That isn’t to slight the visceral ebb and flow of Панихида, “Песнь 6” is a maelstrom of parts black and doom careening from peak to peak. Like with Litourgiya, however, the uniform construction means that when stepping away from the album, it’s often difficult to pinpoint memorable moments. “Powieczerje” on Hospodi uses similar sonic tools toward similar ends but approaching through much slower-burning means (and, all told, is likely the album standout). The ‘big and hollow’ mentioned earlier unfortunately resonates truest on penultimate track “Szestoj Czas”, which is giant sounding but features very little to grasp onto or keep in memory. Hospodi is about ten minutes longer than Панихида but outside of occasional moments like this, doesn’t feel bloated even though “Песнь 8” is a significantly stronger closer than “Liturgiya”.

The reoccurring theme across both Панихида and Hospodi: the core components and destination are the same. Black metal, Orthodox chanting, a penchant for perversions of faith. The intense drama that’s been born out of this entire thing is wholly unnecessary. So this isn’t a comparison between the two albums, at least not in a competitive understanding. Панихида has been out for about six weeks and has had plenty of time to soak in. Hospodi has had significantly less time to simmer but most individuals concerned with the whole affair had made up their minds when the bands released their singles months ago. And whether that’s fair or not, even individually they painted the stories early that their respective albums play out in long form.

The benefit/tragedy (as really, it’s both) is the sundering of the original band and the splitting of the talents that made Litourgiya what it was. That isn’t to slight either band in their current form, they’ve both produced solid albums here. Despite what idealists might clamor for: cultural context matters. Neither of these albums (or whatever they do in the future) will be separated from the acrimonious legal battle over the essence of the band. Hospodi would be a solid release regardless of the band putting it out but given its distance (whether intentioned or not) leaves a somewhat bitter aftertaste while listening knowing it carries the original Batushka moniker.

That is the world we live in. Much like your disposition toward these artists has likely already placed you in one camp or another and you already have a release to champion. For everyone else Панихида and Hospodi are solid albums with which to spend the summer. 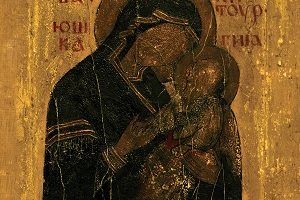