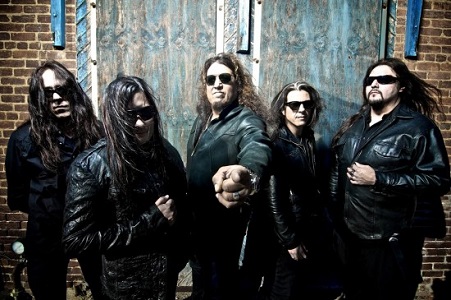 To those who don’t believe thrash is alive and kicking once again, this tour package proves the longevity of the movement. Straight off a series of dates with Anthrax crisscrossing North America, Testament decide to headline a month long jaunt with East Coast veterans Overkill, Arizona’s Flotsam & Jetsam and relative newcomers from Australia 4ARM as support.

Taking in this date during one of the most see-saw winters we’ve seen (the previous weekend dumped 27 inches plus of snow, and tonight featured brutal 40 mph winds making it feel like below zero), the promoters felt it necessary to boost ticket sales by opening the upstairs stage for an afternoon/early evening pre-show warm up, corralling six bands that each got 20 minutes to deliver their songs to a growing by the numbers audience.

By 6:45 pm the intro to 4ARM’s set began from the downstairs arena, and these Aussies take no prisoners with their uppity brand of thrash. Fantastic lead shredding from guitarist Johnny Glovasa and pedal to the metal tempos were the cause they champion. Often opening acts suffer from poor sound levels in the large Palladium walls – and 4ARM were no exception to this, as my ears struggled to make out the vocals of guitarist Danny Tomb amidst a wall of guitars and drums bouncing here, there, and everywhere. Still, songs like “Raise a Fist” and “Spent and Bled” impressed the majority, and I think we’ll be seeing more of this quartet very soon.

Flotsam & Jetsam must feel like the bridesmaids who never get to be the center of attention despite their 27 year recording history since their Doomsday for the Deceiver debut album on Metal Blade. I’ve seen them open for Megadeth in support of Drift with Korn playing above them, and also co-headlining a tour with Nevermore supporting High at the El N Gee Club to a turnout of maybe 70 at its peak.

Unleashing a killer new record in Ugly Noise that will get Metal Blade distribution in April, the quintet is back to four fifths of their No Place For Disgrace lineup – sans current bassist Jason Ward, who sat out for this tour due to personal family commitments and finds Jeff Barbaree sitting in. They made the most of their 30 minutes with two new songs (“Ugly Noise” and “Gitty Up”) and four old classics that the old school metalheads ate up and gave the new generation plenty to revel in (“Hammerhead,” “Iron Tears,” plus the brilliant epics “Escape From Within” and set closer “No Place For Disgrace”). Eric AK this deep into the scene hasn’t lost one ounce of his hefty range, and it was nice to see the back and forth riffing/ trade off lead breaks from guitarists Michael Gilbert and Ed Carlson.

Friday night Bobby Blitz from Overkill had to cancel the band’s performance per doctor’s orders, as he has a serious bout of walking pneumonia. Apparently he got the green light to go in Worcester, but kept his stage moves to a minimum and often went backstage for liquid refreshment and treatment for his voice. He didn’t seem worse for the wear – hitting all the right notes on “Elimination,” “Wrecking Crew” and new favorites like “Come and Get It,” “Electric Rattlesnake,” and “Ironbound.”

His sense of humor was intact for the requisite closer “F*** You” – berating the crowd’s level of enthusiasm for shouting back the chorus by telling us New Englanders “You guys must be a bunch of New York Jets fans!” Overkill came, saw, and mowed the thousands down with their brand of East Coast thrash. Here’s wishing him a safe speedy recovery, as the band had to shut down the remaining dates due to his struggle to recover from his illness.

With their current Dark Roots of Earth album cover as the large backdrop and amid a sea of red lights, Testament took to the stage with “Rise Up.” Little did we know then that the illness brigade also infected the throat of vocalist Chuck Billy, but as the set list moved forward, we noticed more of a sandpaper/ ‘death’ like rasp to his words. Guitarist Eric Peterson took over most of the between song banter, although Chuck gave us a history lesson in early Testament video work with his memories of “Over the Wall” and “Trial by Fire.” Having seen the band four months prior in Maine, I knew there would be a few changes in the set- and I was happy to hear “Burnt Offerings,” “The Haunting,” and “Disciples of the Watch” make the cut.

The 15 song performance featured seven songs from the first two albums and four tracks from The Gathering, including “Riding the Snake” and “Eyes of Wrath.” Drummer Gene Hoglan took command with his thunderous rhythmic chops, leading many in the crowd to air drum along to all the right fills and accents. Alex Skolnick rules the lead roost in terms of potent lead breaks, playing with such grace and ease. The band would end with “The Formation of Damnation,” Chuck apologizing for his ‘shredded’ performance and promising to make it up to Worcester this summer. I appreciated the band’s professionalism as they did their best to deliver what the fans wanted.

In the end, this tour showcases thrash metal’s unifying factor to bring the young and old together for the benefit of all involved. Leather, jean jackets, arm bands, and black t-shirts reigned supreme: teenagers on up to 50 something males and females left exhausted, happy, and ready to tell new tales to others about a show that could not be missed.