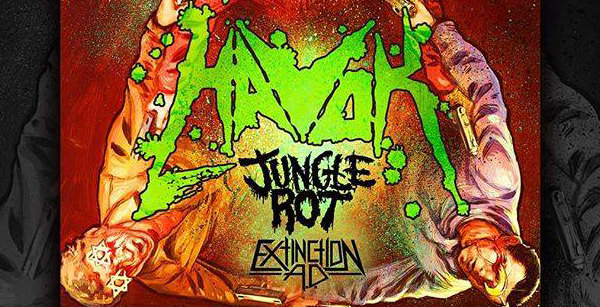 Another face melting humid summer day in the Northeast, Fete Music Hall would be host to a killer package of bands with Colorado thrash maniacs Havok headlining. Receiving ample support from Jungle Rot and Extinction A.D., it’s awesome to experience these diverse tour bills even within the thrash/death platform as it gives audiences the aural diversity necessary to handle a full evening of metal. The show would take place in the smaller lounge confines of Fete – 200 capacity at the max and very close to full by the time Havok would take the stage to end the proceedings.

The first of three local openers Chronovore blitzed through their 25-minute set as if their lives depended upon it. Even as hi-hats and drum sticks from Ethan Proulx would fall to the ground, the band never lost their way – pummeling the listeners with their brand of death/thrash with progressive grooves. Second act Galvanized felt a strong ‘support’ presence for this (family, friends, co-workers) , and the four-some fed off that energy to respond in kind. Their sound is a mix of thrash and metalcore – but at the same time, jackhammer heavy on the three-part growls/screams or the proper hooks/lead breaks even when they choose to go to a breakdown. It’s as if Trivium, Arch Enemy, and Shadows Fall were together and decided to let Slayer and Megadeth come to the party – laying down some sick rhythms, transitions, and harmonization which included bass solo action from Armando Yambao. It’s clear they are on the right path judging by crowd response tonight. FirstBourne probably seemed to be the ‘oddball’ band of the night – what with their more melodic, neoclassical-oriented hard rock/power metal sound easily taking things in a softer direction. Most left impressed between Adrienne Cowan’s electrifying multi-octave prowess and the equally entertaining riffs, licks and tricks out of guitarist Mike Kerr – songs like “Control” and “Pick up the Torch” going down so well, the band would earn a surprise encore with “Heart of a Lion”.

You wouldn’t know it was Extinction A.D.’s first foray into Providence based on the enthusiastic crowd response right out of the gate. With guitarist/vocalist Rick Jimenez encouraging stage diving and circle pits as only a New Yorker can, the audience took full advantage of both as the band hit it out of the part with their brand of crossover thrash that had equal respect for Biohazard as they did for Overkill, Municipal Waste, and Slayer. Sadly sold-out of physical CD’s at their merch table – it’s understandable why as unison headbanging and dripping sweat became the order of the evening.

Jungle Rot has been a meat and potatoes death/groove institution since the early 1990’s. They aren’t fancy, but vicious in their approach of setting the riff table, matching the vocals to it, then shifting up and down the tempo scale to include thrash, hardcore, and groove aspects to the death foundation. Intertwining songs like “Send Forth Oblivion” and “Stay Dead” from their recently issued self-titled ninth studio record as well as past favorites (“E.F.K.” an audience pleaser). Dave Matrise is the consummate frontman, similar to Johnny from Unleashed in knowing how to engage the crowd and deliver sinister words with extreme clarity even as he’s summoning bellows from the grave. Old-timers and newcomers left very impressed, as they are super tight and sharper than ever, which is refreshing for a veteran act this deep into their career.

At 11 pm, Havok would take the stage and showcase to the Providence faithful that they are one of the top tier thrash bands of the new breed. It’s the combination of a killer twin axe tandem, sinister vocals that resemble a raspy Death Angel, and a rhythm section that can be funky one minute and blasting your face off the next that makes them a bit different from the average ‘clone’ or ‘tribute to Bay Area’ group. Pit action would take down merch tables as if it was ECW wrestling, more circle pits would swarm, and we’d even get an alphabet lesson to build up into the next blistering thrash exercise during the band’s hour-long set.

Airing five cuts from personal favorite Time Is Up (including “Fatal Intervention”, “No Amnesty”, and the closing title track) and four from their latest album Conformicide such as “Hang ‘Em High” and “Ingsoc”, their well-oiled tightness allows the listeners to get swept into the energy and output, making for intense exchanges that while chaotic stayed just within the realm of decency – as it could easily have gone off the rails. Vocalist/guitarist David Sanchez also took the time to send a heartfelt appreciation for the people who spent their hard-earned money to see a show when they could have been elsewhere – acknowledging that even in these tough times, people will come out for their favorite bands and get that thrash fix. Expect the band to release their next studio effort by the middle of next year – until then, this show should leave people talking in ‘did you see them in 2018’ terms hopefully for quite some time. 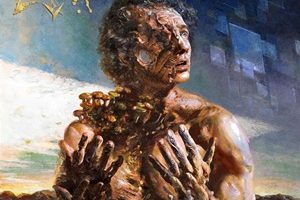 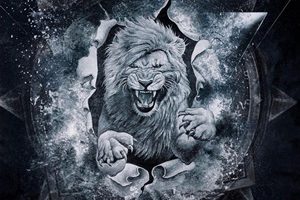