In celebration of 30 years of total world domination, the intergalactic overlords known as GWAR invaded the Worcester Palladium in Massachusetts on Nov. 14. It’s always an entertaining spectacle for the senses when GWAR roll through town and this time was no different, as the Scumdogs laid waste to the Internet, as well as anything with a shred of decency within miles, but the fans wouldn’t have it any other way. Along for the ride this time were melodic death thrashers Battlecross, Framingham, Mass. party thrashers Sonic Pulse, and local Worcester quartet It Destroys and Kills.

It Destroys and Kills ushered in the evening’s proceedings with a sludgy, groove-oriented sound that immediately brought to mind Down. Although the group’s material was light on tempo (for the most part), it was full of heaviness and energy that quickly set heads banging. The whiskey-soaked vocals barked by Mike fit well with the sledgehammer riffs of Lucas, while Vinny laid down plenty of four-string groove and Rich provided a solid foundation behind the kit.

Although the mid-paced tempos may not have matched the speed of later acts of the evening, the audience showed their appreciation when Mike asked if they wanted to hear one or two more songs, responding with an overwhelming two-song request. As the band launched into the final two numbers, the tempos picked up a bit and the pit opened. Having only formed last year, the young band was clearly appreciative of the opportunity to play the main stage and open in front of the throng of crazed GWAR fans.

With Sonic Pulse residing in Massachusetts, I’ve had the fortunate opportunity to see the band many times on various sized stages in venues across New England, but watching them command the main stage at the Palladium with their shredtastic brand of party thrash was another experience altogether.

After introducing themselves to the growing crowd (by the hundreds, as the show was a sellout) with a cover of the “Adventure Time” theme, the band launched into “Defenders of the Good Times” from their latest EP, Adventure Metal, sending the pits into motion and bodies over the wall, as crowd surfers didn’t relent until the band left the stage. “Queen of Beers,” dedicated to “the lovely ladies and the guys who love beer,” and “Jerkoffagus” followed, the latter providing plenty of six-string acrobatics. If you weren’t slamming in the pit or surfing overhead, it was hard not to be awed by the shred skills of guitarists Nick Petrino and Mick Mayer, who also handles lead vocals. With his fingers flying over the fretboard keeping pace with Mayer and Petrino, bassist Sam Peterson is not one to stand idly in the background. Often teaming up for synchronized headbanging or fretboard solo duels, the trio understands stage presence and kept the audience interaction lively and entertaining. Speed is the name of the game with Sonic Pulse, which means skinsman Kyle Larkins is no slouch behind the kit, providing plenty of rapid fills and bass pedal action. “Bong Zombies” and a scorching cover of “Hanger 18” rounded out the set.

This was at least my third time seeing Battlecross, who remind me of the likes of Children of Bodom or Lamb of God in the live setting, as they absolutely crush everything in their path and if you’re not headbanging, you better check your pulse. Guitarists Hiran Deraniyagala and Tony Asta, who resembled a heavy metal Tazmanian Devil while spinning around in circles, doled out driving riffs, sharp melodies and tasty solos, while the drumming and Don Slater’s bass playing served to beef up an already pummeling sound. Leading the charge in front of all of it was vocalist Kyle “Gumby” Gunther, whose guttural barks fall more in line with early melodic death pioneers rather than the thrash titans of the ‘80s, but there’s plenty of slam and heft to the Detroit quintet’s sound. The synchronized windmill headbanging (Amon Amarth, anyone?) served to keep the energy level high, which the band always finds a way to increase every time I see them.

Opening with “Force Fed Lies,” the setlist was equally split between latest offering Rise to Power and War of Will, with four songs from each album, including “Beast” and “Flesh and Bone” from the latter and “Not Your Slave” and “Absence” from the former. After finishing up with what would have been the closer in “Push Pull Destroy,” Gumby said the band was granted extra time and since they didn’t have anything to play better than “Push Pull Destroy,” they would get some help from GWAR on the final song of the set. Brent Purgason (Pustulus Maximus) then joined Battlecross for a crushing cover of “Fucking Hostile.”

With the crowd sufficiently riled up and waiting with anticipation to be covered in various bodily fluids, it was finally time for the overlords to take the stage. After teasing the audience with a dubstep mix of “Sick of You,” Jizmak, Pustulus, Balsac, Beefcake, and Blöthar entered and launched into “Crush, Kill, Destroy” and “Madness at the Core of Time.” As the night wore on, GWAR would learn about and attempt to destroy the Internet and its various applications, such as Spewtube (“Black and Huge”), Fistbook (“I’m in Love (With a Dead Dog)”), and Insta(g)ram (“Captain Crunch,” which featured a large rock of crack being tossed about the stage between GWAR and the slaves before a giant syringe made an appearance).

As the band was celebrating 30 years of torment and domination, the setlist spanned their discography, including old favorites such as “Vlad the Impaler,” “Meat Sandwich,” and “Saddam a Go-Go,” with its upbeat, jazzy horns, next to more recent cuts such as “Let Us Slay,” “Metal Metal Land,” the “old school thrash song” featuring Bonesnapper, “I, Bonesnapper,” and the Bloody Pit of Horror medley of “A Gathering of Ghouls/Storm is Coming/Hail, Genocide!”

Whether thrashing in the pits, crowd surfing, getting covered in blood (and other bodily fluids), headbanging, raising fists and horns, or singing along to familiar favorites, the crowd was full on into the show throughout the night. Two moments that especially received loud cheers were salutes to the late Oderus Urungus and Flattus Maximus as well as Balsac slicing off the head of a terrorist after the terrorist beheaded a news reporter, leaving two decapitated bodies spewing blood all over, during “You Can’t Kill Terror.” One of the more humorous moments came when Kanye West interrupted Hillary Clinton to say that “Beyoncé would make the best chick president of all time,” after which his head and her breasts were torn off during “The Salaminizer.” A proper version of “Sick of You” brought the evening’s festivities to a close.

As hordes of blood-soaked fans exited the Palladium, GWAR left no doubt that 30 years into their career, they are still at the top of their game. While it’s impossible to replace the uniqueness of Oderus (and his Cuttlefish), Blöthar, with his udder and giant antlers, did an admirable job. Hopefully the Scumdogs don’t rest too long at Antarctica before their next bloody conquest. 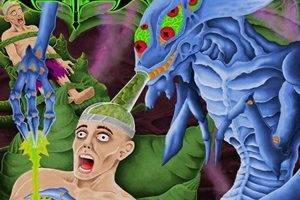