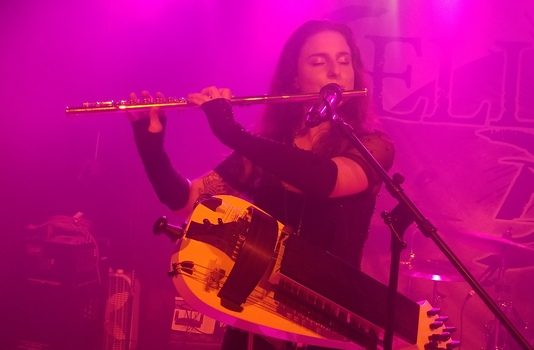 With Cellar Darling being announced last year as a part of this year’s ProgPower USA Festival in Atlanta, many hoped that the trio, comprised of ex-Eluveitie members Anna Murphy, Ivo Henzi, and Merlin Sutter, would consider doing a few extra dates as long as they were here. Happily, the band did decide to add on a few cities around their ProgPower performance and the fitting establishment of Brooklyn’s Saint Vitus Bar would be one of a very select few locations.

Opening up was that of Seven)Suns, a unique string quartet from Brooklyn that plays re-imagined versions of metal and hardcore songs, as well as some of their own original works. In being added to the show rather late, only three members were present and gave their performance as two violins and a cello. However, as one who had not checked the band out beforehand, the lack of membership didn’t detract from the experience and perhaps made it all the more impressive. Converting tracks from bands like Pantera, Converge, and Dillinger Escape Plan into string music seems no easy feat, but Seven)Suns did this masterfully, altering the music into something that was at times ominous, foreboding, and still elegant and graceful. Their original tracks matched the complexity and sometimes chaotic sound of the covers quite well, including the final track which was written based on a volunteering visit to Rikers Island. They were a jovial crew as well, frequently making some jokes and having some good humor about things when they didn’t go according to plan. A show like this one seemed a perfect match for the group, and are certainly worth looking into if you want to hear something a bit more outside of the box.

Hitting the stage at 9:30 was Cellar Darling, who proceeded to play the entirety of their debut, This is the Sound, albeit in different track order, and including their cover of Queen’s “The Prophet Song.” Having peeked online at the band’s sets for ProgPower and Mexico City, this was a wonderfully pleasant surprise. One of the strongest feelings of listening to This is the Sound was that sense of magic and whimsy within the tracks. The music took you to another place and each song has a personality to it, not bound by the usual metal tropes. Impressively, those same feelings hit just as hard when the band was performing live. Even without looking at the band for their on-stage personas, that euphoric vibe of the music itself was enough to generate a large wow-factor. It also gave some added depth and personality to tracks like “Redemption” and “Under the Oak Tree.”

But to simply look away would also have been a mistake. The trio, joined by a touring session bassist, certainly have their own personality on-stage which enhanced the performance. Vocalist/hurdy gurdy player Anna Murphy showed that out of the Eluveitie shadows, she is more than a capable frontwoman. Offering a demure stance, she expressed her gratitude for everyone coming out and noted that she would rather be singing than talking but was very excited for the evening, and offered some occasional chat about the stories of particular tracks as well as injecting some fun humor in at a few instances. And when it came to her vocals, she brought it to another level. One could hear the raw emotion coming through the tracks, as well as in her facial expressions on stage – making for an enigmatic performance, from pumping up the crowd to grabbing a flute on two occasions to banging the drums for a few moments with Merlin Sutter, the few occasions when the spotlight drew entirely to her vocals were simply electrifying. Guitarist Ivo Henzi got in on the action as well, also getting the crowd into the swing of things and interacting with the rest of the band on stage with some cool, hip swagger.

A straight 70-ish minute set, with the band joking about the inability to go offstage for an encore at Saint VItus (and running out of songs to play), made for a surreal and breathtaking experience. It takes a certain level of performance for this scribe to get goosebumps, and Cellar Darling provided them practically start to finish. An intimate evening with a genre-defying band is certainly capable of this, and it’s highly likely that many others left the venue feeling just the same but simply put, this was one of the strongest shows I’ve witnessed in recent memory. Don’t miss Cellar Darling if you get the opportunity to see them. 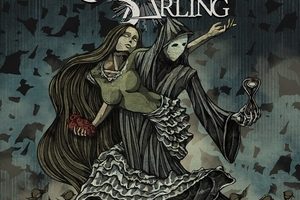