Sometimes when it comes to metal shows in the winter…you have to hope for the best weather-wise, especially in New England. Over the past 2 weeks it seems the sky has opened up and dumped a metric ton of snow, along with below freezing temperatures. Couple this with the start of a tour that although booked months in advance would also coincide with the Napalm Death/Voivod tour at the Worcester Palladium on the same night, and you can guess that Sammy’s Patio would not be severely overcrowded. But as they say, it’s not always the quantity that counts in heavy metal, but often the quality of the audience – and the 75-80 people that did turn out were in for a heavy night of melodic death, extreme metal, and some power metal as well from the five bands entertaining us this evening.

Shortly after 815pm Thunderforge from East Longmeadow, MA would open the evening, trekking all the way from the western to eastern side of the state for this show. Knowing that they would be playing for a heavier crowd, the band wasted no time just pounding out their brand of engaging, all-encompassing power metal. The quintet isn’t afraid to be modern in their approach one minute, a little epic or cultural the next – then downright heavy or progressive if need be. Their stage presence and ability to translate energy and fun into their songs and performance also shines- as you can’t help but get involved, be it a lighter, more restrained cut such as “Hold On” through to their rousing 8 minute plus closer, “Sound the Horn”. One of the best power metal bands in the USA today – be sure to check them out if they hit your area.

Playing their first show in 17 months, Boston extreme melodic metal band Aversed took the stage next. They seemed to toe the line between metal-core and melodic death metal, as guitarist Sungwoo Jeong has an abrasive screaming nature to his main vocals. The guitar playing between Alden Marchand and Mr. Jeong would be the highlight of their performance – gaining lots of kudos for their speedy runs and licks. Elements of Trivium, As I Lay Dying, and Dark Tranquillity came up in their set.

Carnivora would be third on the bill – and the audience appeared ready to go pit crazy right out of the gate to this act. This Danvers, MA five-piece incorporate vicious extreme speed, hints of thrash, and of course death metal at the core of their sound. Sometimes the mid-tempo grooves and riffs are so addictive on first listen, you can’t help but watch others go into hyper drive body spasms. Premiering a bunch of new material at the start of their set, the crowd really threw themselves into the final two numbers from their Eternal release, “Human Decimator” and “Beyond the North”. This would be my third time taking in their live set, and they continue to be jaw dropping in their tight transitions, massive riffing, and sick tempo hits.

New Jersey’s Framework is the main opener on this short 2 week East Coast run of dates, and would be my first time taking in this melodic death metal band. Receiving assistance on second guitar for a few songs in their set from Armageddon’s Joey Concepcion, they seemed to have a good grasp of the European melodic death template, if taken through more of the American aggressive mannerisms. They were alright, but I think I would need to take in their 2014 release A World Distorted to retain more of their songs.

At the stroke of midnight and after a slight effects malfunction (too many wireless devices on stage at Sammy’s Patio can be a bad thing), Armageddon proceeded to command the attention of the crowd. Guitarist Christopher Amott of course is well known in the melodic death metal circles for his years with Arch Enemy – and during the 1990’s and early 2000’s, he would put out Armageddon releases during down time. Now deciding to push this act on a more full-time basis, he’s assembled a great set of musicians from the USA and is ready to support his new album, Captivity and Devourment.

The band certainly knows the style inside and out – Christopher adding clean vocal elements in songs like “Rendition” and “The Watcher” to give listeners a little bit of his power/melodic nuances beyond the obvious heaviness that their melodic death metal offers. Vocalist Antony Hämäläinen (ex-Nightrage) is their current live growler, and he easily can rip the air through his noted death style – while Christopher and Joey lay down a solid wall of guitar riffs, harmonies, and impressive technical chops. Much of the new album would be aired – favorites including the steady mid-tempo headbanger “Fugitive Dust”, “Equalizer”, “Giants”, and “Locked In”.

It’s great to see Christopher and his bandmates of Armageddon engage with the small crowd as if they were playing a 1,000-2,000 seater. The re-building process begins in terms of establishing this act as a viable entity, and I think based on tonight’s reaction they’ll be just fine in attracting more members to the flock. 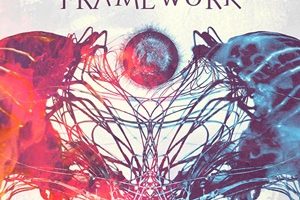