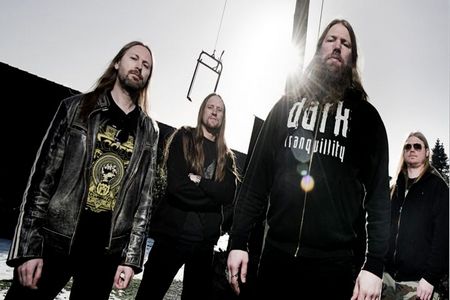 Already being in Rochester, NY to visit family, it seemed like a perfectly good excuse to go catch Amon Amarth on their current tour at the Water Street Music Hall. Driving past the venue a bit past 7PM, a long-ish line was formed outside of the venue. Assuming it would go down a little as parking then ensued (doors supposed opened at 6:30), it was a bit surprisingly to see that the line was indeed growing. A bit of a wait to get it, with only one person doing ID checks and one doing pat-downs, it wasn’t the most efficient of processes and one could hear Exmortus already beginning to play as the line to the door crept ever closer. Arriving inside to catch only the last of Exmortus’ set, one could say that they certainly had a handle on things and the crowd seemed to be quite into it, as much motion could be viewed from the back, along with some crowdsurfing. A bummer to miss out on most of this killer band, one assumes they will be back out on the road sooner rather than later.

Entombed A.D. hit the stage with that ‘oh so familiar’ guitar buzz that all fans know and love. Firing through a 40-ish minute setlist that included just as many Entombed tunes as A.D. ones, it was a solid mix of both eras. Being this writer’s first Entombed (A.D.) live experience, it was nice to see a focus on some older tracks, “Wolverine Blues” and “Left Hand Path” in particular, being played alongside the new material, which included “Dead Dawn,” “The Winner Has Lost,” and “Midas in Reverse.” Vocalist LG Petrov leading the charge, he had a stage presence that the crowd enjoyed, frequently inciting the audience to participate (of which they were more than willing – by this point the venue was pretty well packed), while the rest of the band showed plenty of energy and finesse.

Having caught Amon Amarth after the release of Deceiver of the Gods and knowing the performance the band was going to give, the first thing that stood out was how much effort when into the live experience in and of itself. The band being able to bring over some set decorations, two large Viking horns adorned the side of the drumkit, which sat atop a front of the Viking helmet, gave a more grandiose image than most metal bands (outside of Gwar) usually conjure on the stage. The band frequently used this space to stand a bit taller and fire off a solo, sing, etc. There were also two people who came out during a few tracks as knights and archers in this space, further enhancing the vibe along with a large number of lights and fog. With Amon Amarth really jumping up the ladder in the past few years, it’s cool to see them incorporate a bit of that arena spectacle into the smaller venues.

That being said, Amon Amarth without all of the lights and visuals is still quite a show and the band lived upto their usual. Opening strong with “The Pursuit of Vikings,” it didn’t take the crowd more than a few seconds to start shouting along, easily falling into the command of vocalist Johan Hegg. Hegg is an impressive frontman, with his height giving him some added stage presence and he knows how to work the crowd. The packed venue was shouting along to every chorus, headbanging, fistpumping and adding some “ohs” and “heys” as needed, and the pit was in full service – clearly pleased with what the band was doing onstage. They played through a number of new tracks, including “First Kill,” “The Way of Vikings,” “One Thousand Burning Arrows,” and “At Dawn’s First Light.” Towards the end of the massive, near 2-hour set, was “Raise Your Horns,” in which the band all raised drinking horns and proceeded to drink from them. Amid a crowd of metal horns in the air, look for this one to become a real staple in the band’s live act. Outside of the new cuts, the set was full of fan favorites, including “Deceiver of the Gods,” “Destroyer of the Universe,” “Death in Fire,” “Runes to My Memory,” and “Guardians of Asgaard” all went over quite well (not that any track didn’t). The band closed things out with Johan holding Mjölnir up high and ending things with a thrilling rendition of “Twilight of the Thunder God.”